The security of the mail often refers to the safety and integrity of the letters and parcels that travel through various postal systems. Another sense of security entails ensuring that those items do not introduce hazards to mail handlers and recipients. In early 2020, for instance, China Post announced additional measures to assure that individuals would minimize the possibilities of spreading the new coronavirus through the handling of mailed items (U.S. Postal Service, 2020). Years earlier, in October 2001, the U.S. Postal Service faced the threat of anthrax-laden letters and responded with more stringent protocols for handling mail destined for governmental officials (Dewan, 2002).

Other postal services have taken similar precautions over the years, both as responses to outbreaks and crises and as protocols implemented as elements of programs to address long-term issues. Bhutan's government enacted a long-standing program as part of that country's efforts to eradicate (and later to control) malaria. One source summarizes the country's multidecade efforts to combat the disease, noting that


A malaria eradication programme was first established in Bhutan in 1964. However, following a rapid increase in cases, Bhutan transitioned to a malaria control program from 1971 to 1995. This increase might have been caused by a reduction in the frequency of indoor residual spraying from three times a year during 1965-74 to twice a year from 1974, the coverage of which also fell from 80% in 1973 to below 50% in 1974. Moreover, active case detection was initiated in 1969 and continued until 1989, meaning that a higher proportion of cases was identified, thereby increasing the number of cases recorded (Wangdi, 2016).


active case detection... initiated in 1969 through the establishment of malaria centers in the endemic districts. However, despite these efforts, cases began to increase in the 1970s, and the percentage of cases due to P[lasmodium] falciparum rose dramatically from 12 percent of cases in 1968 to 57 percent of cases by 1975. An increase in density of the An[opheles] maculotus vector was the suspected cause of this trend (UCSF, 2016).

These summaries make clear that Bhutan's antimalarial efforts in the early 1970s, in particular, saw both progress and setbacks in the country's battle with malaria.

The notion of vectors-the means by which a disease spreads to new populations-contributes to understanding why the mail that moved through Bhutan in this period would undergo scrutiny. Various surviving mail pieces show the notations of these examinations, as the research by members of Malaria Philatelists International has documented (Birrer, 2004).

The cover depicted in Fig. 1, a letter sent from Shemgong to Phuntsholing, Bhutan, shows one of the markings reported in the organization's Handbook of Malaria Philately. The following presentation describes the journey taken by this letter, as indicated by the various markings on the cover. It also reports a new earliest known date of use of this particular malaria program marking.

Fig. 1. Shemgong to Phuntsholing, Bhutan. Three 1971 definitive stamps from the Wangdiphondrang Dzong and Bridge definitive series paid 35 Ch. (chhertum) for a letter (original: 251.0 mm x 115.0 mm), most likely postmarked on 21 May 1972. A hand-annotated malaria program marking appears in the lower-left corner. The back of the envelope bears two circular date stamp (CDS) postmarks.

Both sides of the cover contain markings that provide dates noting the letter's various stops on its travels from sender to recipient. --24/5-appears as a penned annotation above the malaria program marking, as the detailed view presented in Fig. 2 shows. Given that the various postmarks all fall in May 1972, assuming these figures represent the date the letter passed its inspection seems reasonable. 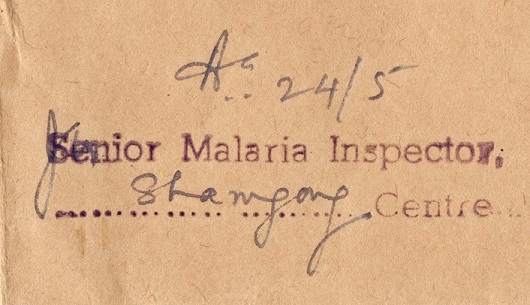 The purple-ink handstamp (original: 51.0 mm x 9.5 mm) uses the phrase "Senior Malaria Inspector," which the inspector revised to read "Junior." The font in the handstamp matches the partial impression, MK-7, in Fig. 3(a), while the handstamp's text matches the wording of the marking, MK-8A, presented in Fig. 3(b).

Given the match of font face, it seems that the malaria marking on the cover more closely resembles the partial marking designed as MK-7 in the Handbook of Malaria Philately.

Two circular date stamps appear on the back of the envelope, as the image in Fig. 4 shows. The right-hand stamp, which is nearly inverted, uses the English place name "Gelegphu" and a dateline of "25MAY7?", where the question mark indicates an illegible digit. The later, left-hand CDS indicates the letter arrived at the Phuntsholing G.P.O. (General Post Office) on 27 May 1972.

Fig. 4. Circular Date Stamps. (a) The back of the envelope contains a CDS from Gelegphu, right, displaying the date "25 May 72," and a CDS from Phuntsholing G.P.O., left, noting the destination receiving date of "27 May 72." (b) Postmarks on the stamps show that the letter entered the mail system at Shemgong on "21 May 72."

These markings and postmarks serve to support a summary of the letter's journey through Bhutan, as Table 1 summarizes. 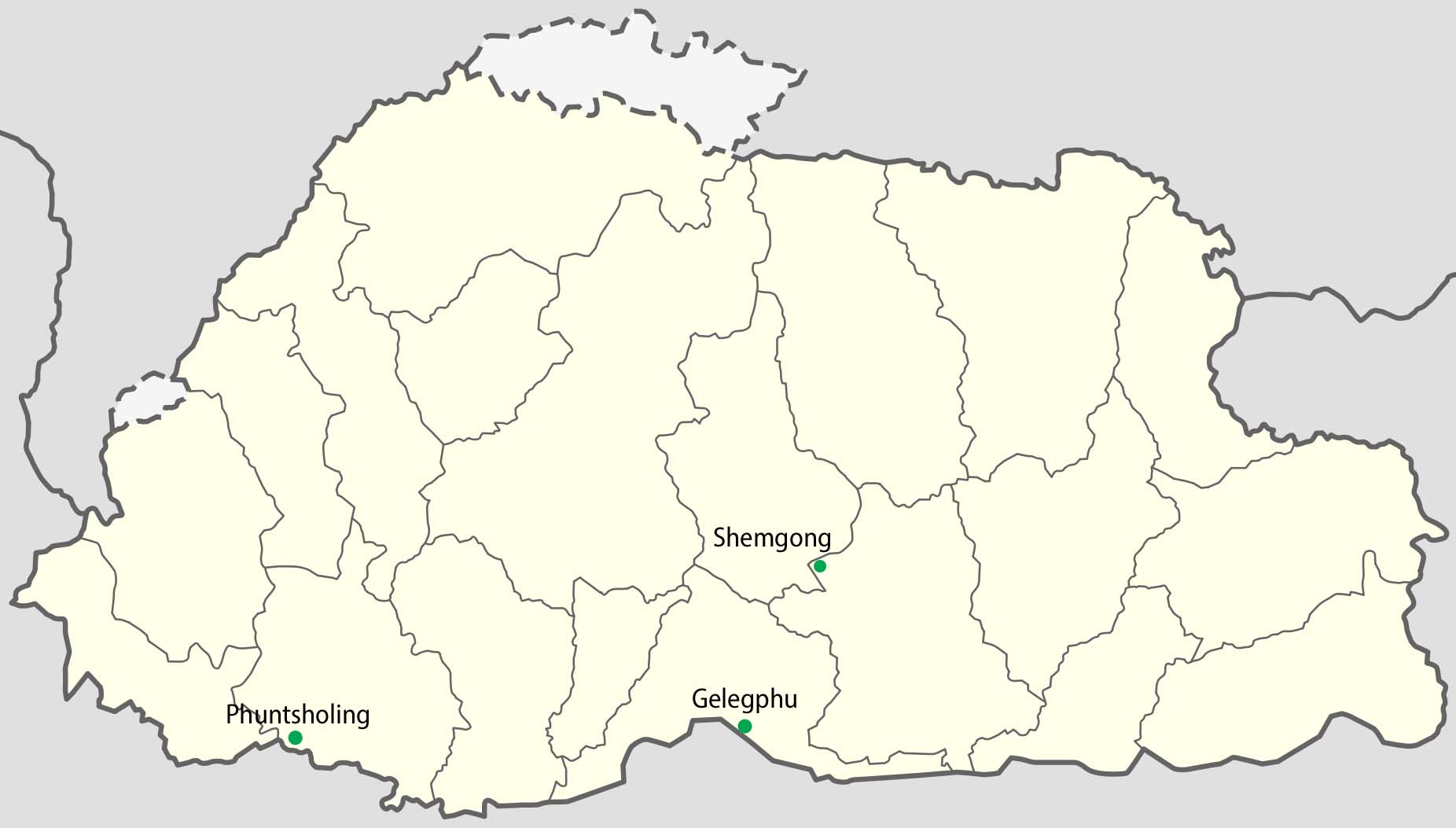 The dates in the markings indicate the letter required six days to pass from its post office of mailing to the local inspection center and then to its destination. These locations appear on the map in Fig. 5 above. Each of these locations lies in a district that remains, to this day, a part of Bhutan in which malaria remains a commonly contracted malady. The map appearing in Fig. 6, below, shows how Bhutan's southern regional tier was recently "considered malaria-endemic" (Yangzom, 2012). 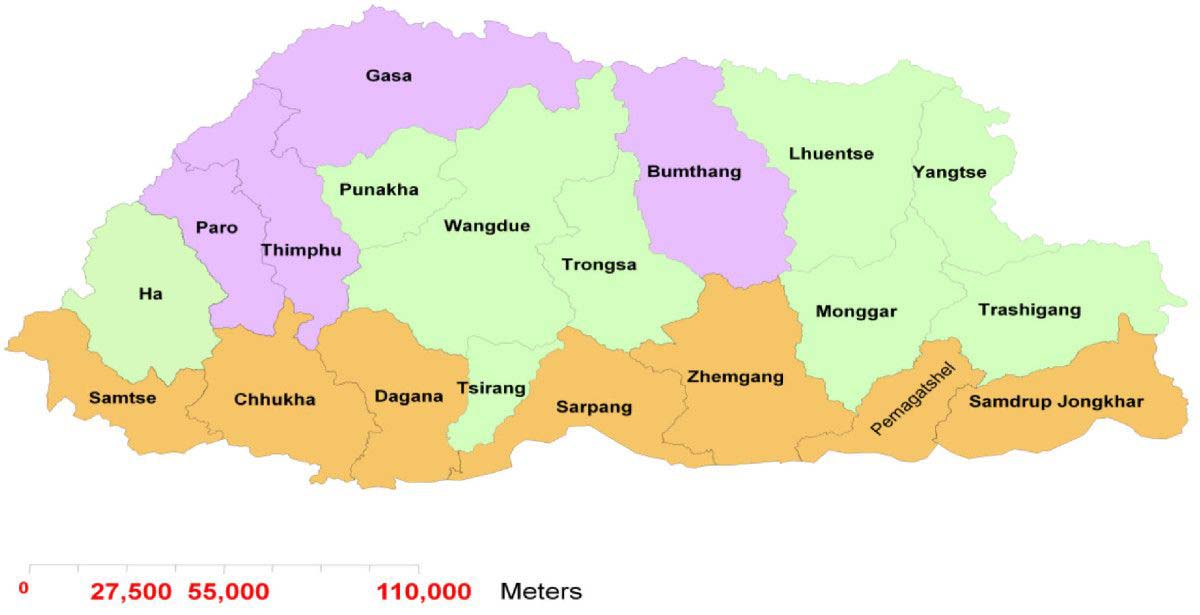 A comparison of the malaria marking on this envelope with two related markings appearing in Handbook of Malaria Philately supports the proposal that this marking represents a full impression of type MK-7. The inspector's revision of "Senior" to "Junior" is distinctive and may indicate that only one handstamp was available at the inspection center. Finally, the penned date above the marking establishes a first known use of 24 May 1972 for MK-7.

David M. Frye collects items to inform his study of modern United States postal history and Tanzania's post-colonial postal history. His writings have appeared in The Airpost Journal, Auxiliary Markings, B.E.A.-The Bulletin of the East Africa Study Circle, Postal History Journal, The Postal Label Bulletin, The United States Specialist, and The Vermont Philatelist. A member of the Board of Directors of the Postal History Society, he lives in Franklin, Massachusetts, and works in nearby Framingham as a clerk for the U.S. Postal Service.